Every couple wants that memorable entrance when they are first announced as husband and wife. Sometimes they burst into the reception with a choreographed dance, song or skit of sorts. For this Arizona couple in Camp Verde, their planned entrance didn’t quite go as planned… however it was one entrance their guests wouldn’t soon forget!
Story Source: ABC15

Humor has recently transcended into wedding tradition. A small prank here & there,  a little laugh in the ceremony to calm your nerves in the midst of such a serious moment. No big deal right? For one bride it ended up being a very serious matter indeed.
A bride was about to marry the love of her life at a beautiful castle in Styer, upper Austria when she made a joke that backfired, causing the officiant performing the ceremony to refuse to finish. The bride jokingly said “I don’t” in response to the question “do you take this man…” before quickly correcting herself during the ceremony. The officiant had to stop the wedding due to a law. An Austrian law intended to prevent forced marriage, states that if either party replies to the key question in a negative way, the wedding is immediately stopped and cannot be rescheduled for a further 10 weeks.

The bride said: “We had to send all of our guests home and now we have to wait until March before we can try again… In retrospect it was probably not so funny.”

We think it was pretty funny, what are your thoughts?

Imagine being in your best friend’s wedding. It’s just about to start and everyone looks so beautiful waiting in the limousine to be escorted into the ceremony hall by their bridal party counter part. Sounds perfect right? Well, not for this bridal party! As they sat in the limousine outside of the church, a man came to the driver’s side window and knocked out the glass, threatening everyone inside. The party jumped out of the limousine in their dresses, holding their flowers and watched as the limo drove away.

This all happened seconds before they were to be escorted in and walk down the aisle before their dear friends tied the knot. They did not tell the bride or groom until after the ceremony had completed. When everyone exited the church, they were greeted by the limousine driver, caution tape and policemen. The limousine was found soon after the ceremony, abandoned and unscratched from the hijacker. Luckily no one was hurt!

This particular groom wanted to give his perfect girl the perfect proposal. He carefully chose a beautiful walk way above the Brooklyn Bridge, with a gorgeous view of New York. He took her to this perfect spot for the perfect moment, or so he thought.

The groom got down on one knee and asked “Will you marry me?” Then he opened the box and the ring fell out! He watched as the ring tumbled to the roadway below and then sprung into action. He started climbing down the bridge’s superstructure. His act of heroism  sparked a suicide-jumper alert! After returning to safety with the ring in hand, he managed to convince the police that he was not planning to end his life on the bridge that day, but just the opposite.
Story Source: NY Daily News

One Ohio bride has one of those legendary wedding-day horror stories that seem to happen only in movies.

The couple had their rehearsal dinner at the restaurant where they first met. As a surprise gift, the restaurant gave them a big, beautiful tray of stone crabs, as congratulations. The next day, when the bride woke up, she had a very upset stomach but just attributed it to nerves.
It turned out in fact that she had food poisoning! At some point during her lengthy ceremony, she had to clamp her hand over her mouth. The priest noticed the bride’s actions and quickly finished the ceremony up, and the couple back up the aisle.

The bride made it to the back of the church and where she promptly vomited it all over her gown. The bride remarked, “It was a really small wedding, and everybody knew. I was mortified, but it was the highlight of everyone’s day.” 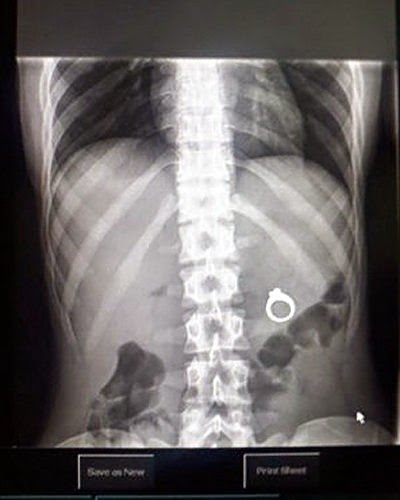 This soon-to-be groom thought long and hard about how he would like to propose to the love of his life. He decided to go with the good old ring in the drink play. Instead of putting the engagement ring in a glass of sparkling wine or a martini, he had the genus idea to put it in a Wendy’s milkshake.

Everything was going according to plan until the shake was gone and the groom noticed that so was the ring. It took an emergency X-ray for the soon-to-be bride to believe her man’s urgent story about what had accidentally happened.

Once he had the X-ray image of the ring in her stomach, he dropped to one knee and popped the question! After saying yes, she eventually retrieved the ring, cleaned it and wore it.