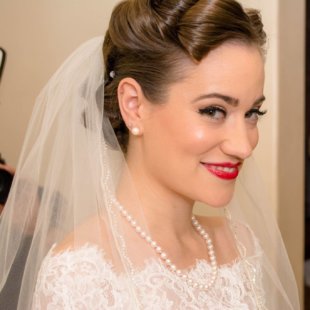 What is your name and your groom’s name? Kelley & Neil

How did you and your groom meet? We met while working at the Wisconsin Early Autism Project in Madison, WI. The first time we worked together we both noticed each other.  It actually took one of our client’s moms to convince Neil that I was, in fact, interested in him.

We are dying to know, how did he propose?! Funny you should ask, because I wrote a whole prose piece about the proposal the day after it happened:

Neil was totally captivated by the Grand Canyon. I couldn’t help but smile at my gangly rock hound as we continued further into the park. I parked the car near the geology museum, filled my purse with two bottles of water and a sandwich, and then we both got out and began walking.

Neil’s gasps and murmurs continued along the walk towards the park center. I couldn’t help myself and began ooing and aahing along with him: it was such an incredible sight!

Along the walk, some conversations were struck up with other canyon visitors. Meeting Sam, the bassist of the metal band Barrier, was probably the most eventful: we encountered him, barefoot and bare-chested, meditating on the ledge of the canyon. Neil joined him and, when he finished, almost fell into the canyon while performing a sun salutation in his boots (“Jesus Christ, sweetie!”). After that scare, we chatted with Sam for a bit, learning his name, profession, and that he was from Chicago. His band was on tour and heading to California for a show that night. In a second run-in with Sam, he looked at us with his warm, kind eyes, and said, “I don’t’ know if I’ll ever see you again, but I want you to know that I love you guys.”

“We love you too!” we told him, practically in unison. Looking back, I get the feeling that he knew what Neil was about to do…

During our walk, I commented, “Wouldn’t it be awesome to do engagement photos out here? We should do that at Christmas! Assuming you’ve proposed to me by then, of course.”

I literally had no idea what was about to happen.

Eventually on our hike, we turned around and made our way back to the museum and the car. We went into the museum and, after a brief exploration, went over to the gift shop corner and made some purchases. Upon putting them in the car, I said, “You know what? I’m tired, and a little hungry. Why don’t we go get some food?”

“Well… Will we come back? Because I’d like to come back if we leave now…” Eventually, Neil convinced me to get back out of the car and come marvel at the canyon together one last time (“The sun has gone down a little, so it looks different now!”).

We plunked down on a ledge and gawked at the view. A little down the way, a couple was struggling to fit themselves and the canyon into a photo on their phone, so Neil offered a trade: we take their picture if they take ours. Immediately after our photo was done, I sat back down on the ledge, and gazed out at the gorgeous natural wonder, contemplating life, love, and nature.

“Hey Kelley,” I hear behind me.

Upon turning around, I saw Neil on one knee, holding a ring box with a gorgeous band of diamonds in it.

He hadn’t even said the words yet, but I didn’t care; I knew what they were, and I already knew my answer.

Everyone around us gasped and smiled and clapped. A whispered “congratulations!” with a huge smile came from one woman who walked by us.

Later, in the car, I teased him for not actually asking “the question.”  “You didn’t even give me a chance to!” he countered. But then, he took my hands, looked me in the eyes, and asked me, “Kelley Noel Rolak, will you marry me?” “Yes, Robert Neil Thomas Graupner,” I smiled, “Yes I will.” 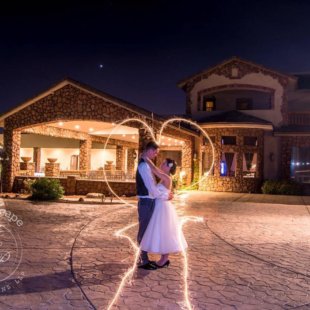 What were your wedding colors and why did you choose them? Our colors were variations of primary colors (red, yellow, and blue). The meaning was twofold. First, the three primary colors are prominent in the Autism awareness symbol. Second, Neil has Scottish heritage and, while we eventually nixed the idea of the groomsmen wearing kilts for the wedding, we wanted to pay homage to the Dalrymple family tartan (Neil’s grandmother’s maiden name).

Where did you find your dress? Would you say that finding your dress was relatively easy or difficult? I found my dress at Vera’s House of Bridals in Madison, WI.  I knew I wanted a tea-length gown, and while at this expo, I saw a woman dressed in basically the perfect gown. When I saw her I froze, with my jaw hanging open. The woman wearing the dress saw me and laughed. She then came over to me and said hello. Of course, I was so excited, I was barely able to stammer out, “Dress! Where! Perfect!” She then let me know that she was a consultant at Vera’s and that all I had to do was call them to make an appointment.

The appointment itself was so much fun. I brought my mom, my sister, and future mother-in-law to come help me decide what dress to choose. The first dress I tried on was, of course, the dress I fell in love with at the expo. It was wonderful! There were quite a few options, and I didn’t want to miss something if it could be even more perfect. I’m glad I made that choice, because the dress I ended up choosing was the fourth dress that I tried on!

The dress itself was a relatively plain strapless tea-length gown. But the feel of it made me do the same “I love this floofy dress” happy spinning that I did in the first dress. But something was missing, so we tried adding a belt, which added some much needed bling. My FMIL suggested a jacket. I think we were both thinking of a bolero, but what they brought out was so much better: a lace 3/4 sleeve, portrait neckline jacket that buttoned in the back. In all of the wedding dress TV shows, it seems like every bride cries when they find “their dress.” Well, that was the moment I burst into tears.

So a relatively easy experience, but still storied. 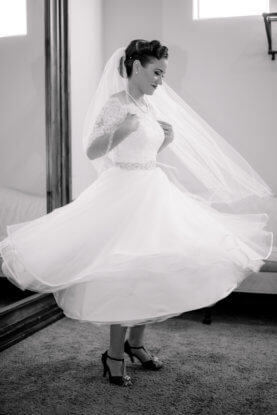 Where did your ceremony and reception take place? Was there any special meaning behind the choice of the venue(s)? Our ceremony and reception took place at Superstition Manor in Mesa, AZ. While we both live and work in Wisconsin, my parents both have family in Arizona. I have even spent every Christmas that I can remember (except one) in Mesa. And the idea of having a winter wedding somewhere where it wasn’t ACTUALLY winter (sorry, Arizonians, but you don’t know what cold is) was also definitely a large factor in picking Arizona.  Superstition Manor closes at 9pm on weeknights. We knew the party would last later than 9 pm, so we rented a party bus to take us out to Scottsdale for an after-party pub crawl!

What kind of flowers did you have in your bouquet and at the ceremony/reception? I had wildflowers that fit the color theme in the bouquet, including some dahlias. Neil was actually the one to take care of the floral arrangements, as I was busy with graduate school. I could not make it to the tasting at Superstition, so Neil, his mother, and my father went in my place. Neil picked the menu, scouted photographers, and settled all of the floral details. Knowing that I am a Star Wars nerd, he made sure that the florist included a light saber hilt in the handle of the bouquet. Brenda even made sure that the noise mechanism worked, which made the bouquet exponentially more fun! So I think Neil did a pretty great job with the things he helped with.

What was the flavor of your wedding cake? We had a vanilla cutting cake, with mini cheesecakes and mini red velvet cupcakes as the dessert.

What details from your wedding that made it unique to you? Neil’s uncle officiated our wedding, and gave us each a mate from a pair of Christmas socks as a metaphor for the cooperation we would need to develop in order to make our marriage work.

For our first dance, we used a piece of music called “Waltz for Zizi,” from the anime show “Cowboy Bebop.” The father-daughter dance was to “Not While I’m Around,” covered by Jamie Cullum. I had had my heart set on using Jamie Cullum’s version of the song for years before I realized that it was a cover of a song from “Sweeny Todd,” but I decided I didn’t care.

We signed our marriage certificate with a Darth Vader pen.

Neil has a 125-year-old railroad pocket watch that he carried with him.  My father gave it to him for Christmas. It had belonged to his great grandfather while he was working as a doctor for the railroad as it was expanding to Santa Fe, New Mexico.

I occasionally play with an old time band in Madison called the No Name Stringband. I had hoped they would be able to play for the wedding but their schedules did not allow for it. As a gift to me, the band recorded a new version of their original piece, “You Look Alright, Still,” for me to use in their absence.

Did you provide favors to your guests?  If so, what were they?  We had small cactus tea lights in red glass tea candle holders. We also made coloring books and had sets of crayons for everyone in case they were waiting during pictures. 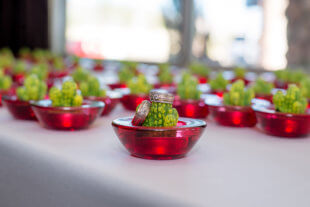 Other than marrying your husband, what was one of your favorite moments from your wedding day? The photo booth at the wedding was so much fun! We also had rented a party bus to use after the wedding!

Did you take a honeymoon? If so, where did you go? We took our honeymoon 3 months after the wedding. We went on a Disney Cruise through the western Caribbean: Cozumel, Mexico; Grand Cayman, Cayman Islands; Falmouth, Jamaica, and Disney’s Castaway Cay. The cruise even had a Star Wars day at sea!

What is one piece of wisdom you learned from your planning experience that you would like to share with future brides? Delegation is important! If you are busy, allow someone you trust to take the reigns. You may even end up with the best bouquet ever!

Who were some of the other vendors that were a part of your dream team? Lasting Impressions Weddings – Brenda (floral)
Royal Escape Productions – Joshua (photography) – When we first met our photographer to set up a contract, the three of us ended up chatting for an hour before we finally got down to business. Joshua from Royal Escape Productions is easy to get to know which made having him and his team at the wedding even more fun. It truly felt like they were friends who just happened to be taking our pictures.
Superstition Manor – Brittany (venue)
Save this Dance – Tyler (DJ) 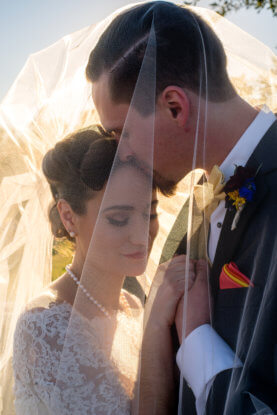